The Colour Of Money

I’m not so bothered about it myself as we are well prepared for any eventuality. We have warm cloths and wet weather gear should it turn inclement. When the temperature is high and the sun shines we can strip to shirt sleeves and maybe even slip our ties off. At night we have our tents and sleeping bags, and if we were to get soaked i carry a spare pair of underpants and socks.

My concern is always for the comfort of the audience and the thought of us having to cancel a show.

Not out of greed you understand, i am happy to live the life of a showman and as such i have to balance my high quality of life against the fact that i will never be a wealthy man in money. Had i wanted to be a millionaire i would have become an investment banker or politician rather than a clown.

Our benefactors in this project Lakes Alive fully understand that our aim is not to try and match the massive audiences that their other large scale festivals and projects achieve and instead our tiny trundling puppet show travels to remote areas in search of tiny community audiences. Thankfully we are not concerned with footfall or pie charts that estimate our value or click count audience figures to calculate our worth.

I do however worry that people may be disappointed if we cancel especially if they have travelled a long way to see the show or don’t have another opportunity.

From the beer garden of the Eagle and Child looking towards the mountain and the dark looming clouds it looked like we were beaten and for the first time would have to cancel. Earlier i had negotiated the use of the restaurant in the pub should the weather turn but just as we decided to drag Dolly up the steps to the room the landlord received further bookings and we were unable to use the room after all. Ironic then that because many had come especially to see the show and reserve to eat we had done ourselves out of the only venue available to show.

Our audience gathered on the tables beside the river and we set up in hope. The sky was dark and the temperature low as we struck up our overture. Then by a miracle a bright gap appeared in the heavy grey clouds above us and we were basked in sunshine for the duration of the performance. A full 60 people watched our show and we took £49.80 in my old hat. Our routines and songs went well and many people thanked us before moving inside to eat and drink to celebrate Friday night and the weekend. The children and parents slipped off home to bed including my family and son Alfie who’s birthday it was. Thanks to our full compliment of audience who joined in the singing of his birthday song.

We shared our take, packed down and moved into the pub. It has always been our intension to spend as much of our take as local to where we collected it and all but £4.00 each went behind the bar of The Eagle and Child to cover our food and beer bill.

We spent far to much time in the bar with a brigade from the Dry Stone Wall Association and their gang master Bob, and before long we noticed that it was getting rather dark and we had an hour yet to push to the garden where we were to stay. Shelly our would be host suggested we might stay with the wall gang who were gathering to erect a dry stone wall as their camp site was a lot closer and this was agreed with Bob if we were to pitch in with his erection in the morning.

We arrived to the field overlooking the build as it grew dark and pitched our tents with head torches on and in the nick of time. It was too dark and we were too tired to make it back to the pub and anyway we had just £4.00 left to cover our breakfast in the morning. We settled to sleep and i took a call from Sarah who built our puppets asking after their welfare and i told her of our adventure so far. She had managed to watch us on TV and for the first time could put a face to Lord Gregg’s voice.

I zipped up and bedded down. Looking forward to some gentle drystone walling for breakfast. The rain fell hard throughout the night but our tents stayed dry and i was to slept well.

In the morning i walked down to the build where probably 40 people were busy erecting the wall. The walkway along the riverside was being widened so that wheelchair bound outdoor enthusiasts might continue the travel the path at a point where it became too thin. The local farmer had agreed to donate the land and a local slate quarry had gifted the stone. Bob and his dry stone wall association had offered to erect it along with many local and national enthusiasts.

The process looks rather easy at first viewing but when you look closer there is indeed a massive skill in chipping away at the slate in order to place it carefully for the strongest structure. I was told by veterans that some people can even tell who built sections of wall by the personality they leave behind in layout of the stone.

Sadly i was unable to join in the heavy lifting as the wall rose in front of me. I had slipped some discs a few years ago and as such have to be forever cautious when lifting but also it was wet dirty work and i only posses my dapper showman uniform and was fearful of tainting it.

One worker mentioned that every song ever written about the activity of dry stone walling is dirgeful and offered to let me listen to a compilation CD of the very best of dry stone walling songs. She suggested that maybe i could write a jolly song instead and i agreed and will do so as soon as possible. I chatted and photographed the proceedings for material and we left shortly after to breakfast with our last £4.00 each.

I look forward to slipping back one day and seeing the final finished wall. Apparently it will live for 150 years. A long time after i am gone and this vagabond adventure has faded from living memory. 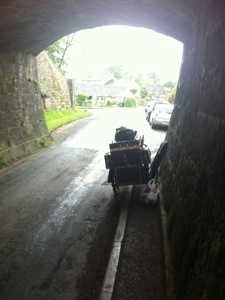