And So To Bed

What would our first night bring? After the interesting incident with the Royal Pigs of Piel things became more pleasant. Having rummaged through the sty to recover our collection of beards, balloons and remaining provisions Lord Gregg produced an ace from his deck. Lime and coriander marinated turkey steaks grilled gently on the barbecue with a selection of vegetables. This amply topped off a starter of haloumi and sun dried tomato, Wine and brandy coffee accompanied by a glorious sunset.

The King was less pleased with us as our throw away BBQ left something of a patch on his lawn. Burning in Hell was mentioned so visitors to the Island be warned that naked flame is very much frowned upon.

Still, as it was pitch dark and the temperature had dropped quickly it was time for bed and a chance to test out our camping gear. Lorg Gregg had commented early in our planning of the trip that and island on our first night was perhaps not the best place for a dummy run. On reflection maybe he had a point.

Our sleeping bags did as much as they could, and do have a wonderful little hood that keeps your noggin warm but the conditions were less than boiling.

Curling my hand outside the confines of my sarcophagus the air inside the tent was freezing. I felt rather like a submarine pushing it’s periscope out of a conning tower at one of the poles.

I gradually added my clothes throughout the night and as the dawn chorus rippled around the island at 4.50 am the seagulls decided to have a fight beside my tent. Later as the sun came up the tent warmed and i enjoyed a few hours of sleep before Lord Gregg woke me with a turkey bacon roll and mug of fresh coffee.

The tents are now packed and we have wheeled our Dolly into position. The wind has dropped and we look forward to receiving as many guests as the ferry can carry.

After this afternoons premier we sail back to Barrow before setting off on our first shunt and fresh adventures. We have already started cutting things we simply cant carry, so we will have to leave our camping seats and most of the kitchen behind.

The Queen paid a visit for breakfast and advised us to order some survival bags to alleviate the cold. Thanks!

See you on Piel or later at one of our many performances. Check the gigs page for details. 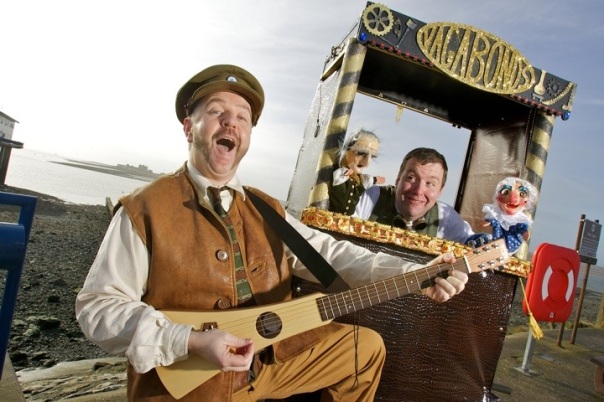