Reunited with Lord Gregg we joined Janice for Lunch in a rather Posh restaurant by the name of Hazelmere. I chose the seafood platter and it was very welcome as i had waited a good while to eat. I have always found that every mouthful of food or beer bought with the honest money collected in your showman’s hat tastes better and i feasted well on the salmon shrimp and various salads.

Having eaten we relaxed back to read further news of our progress in the Evening Mail and were overjoyed to find ourselves pictured on the front page. To celebrate we ordered a Yorkshire curd tart served with Wensleydale cheese and a pot or rare tea who’s name escapes me. Full to burst we waved goodbye to Janice and set off up the hill to find the bandstand where we were to give tonights show.

Along the way i crossed the road to offer one of our cards to an interested family enjoying the evening in the garden and before long we were ensconced inside giving an impromptu performance as the family in question were unable to join us at the bandstand. We provided much hilarity to the gathered clan and after a short show we slipped out with our hat already starting to fill.

Arriving at the bandstand the anticipation of the evenings show began to build. Four tea ladies were waiting to receive us full of cheer as they were also looking forward to an evening of line dancing after our show. We set up on the bandstand and awaited our audience. Things at first looked grim but on the stroke of 6.30 gaggles of families started to arrive from every direction and before long we had a perfectly sized audience for our venue, a full house of around 40 people.

The evening was warm and silent and our show burst all over and around the bandstand. A fun show with lots of laughs tonight and the take was an impressive £44.82. That alongside the collection taken in the previous garden yielded a total of £53.82. With one more performance planned for the sea front on Saturday afternoon before leaving for Beetham we were on course to again break our record for collections in each town.

All too soon we were packing down and i found myself in conversation with the parents of three of the children who had enjoyed the show. Turns out they were the managers of the beautiful art deco Midland Hotel in Morecambe and were interested in bringing us Vagabonds for a performance. I talked at length with them and explained that it would not be the first time i had cut a deal with the jewel in Morecambe’s crown. I have for many years been a showman offering puppet shows and i cut my teeth working outside the Midland for food, board and beer with my best of mates Uncle Tacko when we created Poppets Puppets. He and i have performed as Vagabond showmen together for 25 years and had he not been busy touring with his own show telling the story of Dan Leno he would have joined myself and Lord Gregg on this adventure. I am very excited to think that history might repeat itself.

Once more to the road to find our camp site and a good push up the steepest of hills so far, later described by the camp site owner as “cardiac cliff”.

The views from our pitch around the bay were vast. It was possible to see for miles. A good job too as we were able to notice that weather was about to change violently. The skys started to flash, thunder roared and the rain started to fall as the last of our tent pegs hammered home. Dolly was safely locked away in the site office and having thrown everything we owned into our tents we settled under the eaves of the shower block to watch this glorious show of nature. We drank wine together and Lord Gregg told me stories of his seafaring Uncle sadly recently departed and that very afternoon setting sail on his final voyage.

Hats off and Bon Voyage.

As the sky lifted we made for town and spent our takings in the pub and a local Chinese restaurant. Once home we zipped up and the heavens opened once more. The rain hammered down and i was soon to discover that the new canvas was more toy than tent and it was quickly filling up. I gathered my things to the centre around me and laid out towels and toilet roll to collect the wet. I did however stay upbeat and sought solace from the brandy in my hip-flask and few further chapters of Walters adventures. As i lay there with the rain seeping in through the stitching of my accommodation read of how Wilkinson was battling a fire in his having left it to close to his stove. Not only did he burn his tent but the lawn and half the hedgerow, so i decided by comparison a damp sleeping bag and belongings was not the end of anybody’s world. I slept well as the temperature was comfortable if moist.

For breakfast we trundled back into town for a fry up and as type sit sipping coffee waiting for the clouds to brighten in hope of a promenade performance. Less chance now as the rain is again falling and crowds of holiday makers are starting to gather under the cafe veranda. Who knows what possibilities that might offer. 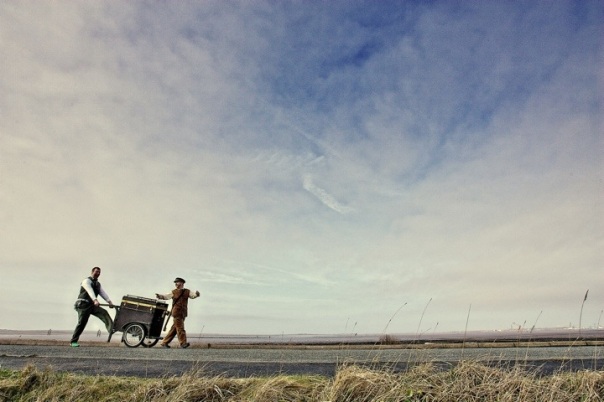