The Kindness of Cumbria

MYSELF (Via a Russian Ballerinas phone)

Sorry to bother you. My name is Gacko and i’m a wandering story teller…….

Im commissioned by the Lakes Alive people from Kendal……

You know the ones that do those big street theatre events with artists from all over the world?…. Right here in Cumbria…. Outdoors…… free!

Well a local one.

I’m traveling the county with a cart called Dolly. She transforms into a puppet theatre and we perform our show in very remote locations….

Local stories from Cumbria, and we are pushing the cart…..called Dolly all around the county on foot.

Myself and companion Lord Gregg would very much like to borrow your hall.

We want to do our show you see. But its howling with rain and the grass will be wet even if it stops right now.

I realise your busy and i would hate to put you to any trouble, but if you are in agreement it might well salvage tonights show. The Russian lady says your the bloke to talk with? … About the Hall. Can we borrow it? Just for tonight?

RAY (On his landline) I. Go on then. Tell the ballerina to leave the key in the secret place after she leaves and i’ll come and lock up when your done.

Only in Cumbria could a faceless showman via another persons phone secure a warm dry venue two hours before lights up for an invited audience of strangers.

A man i had never met agreed immediately to offer the communities village hall for our production and we filled it with a good twenty five people and with seconds to spare before raising our curtain.

Earlier that afternoon i had approached a very athletic woman outside the village hall and asked if we could shelter as the local church was busy with a funeral and the rain was hammering down.

The lady in question (Who’s name escapes me as i washed her business card in my dress shirt this afternoon and i famously forget names with ease) was to run a palates and ballet lesson for the locals at 3.30.

As yet her class was to arrive. Taking pity on our plight she explained that this was her first visit to the village hall and we should ring Ray to seek his permission to both hide for now and maybe later utilise the venue as our theatre for the evenings performance.

We spent a pleasant hour chatting and drinking coffee before us Vagabonds set up for another indoor performance and our ballerina left for home defunct of any participants.

I hope and am sure her workshops will fill up in time.

Lord Gregg and myself took in in turns to patrol the village green of Natland hunting for any arriving audience. I stood under a thick tree outside the church when a very friendly and chiselled lycra clad cyclist bloke alongside a pretty woman in a white summer dress approached and asked if i were a Vagabond.

Lisa and David Harrison local eye doctors and supporters of the Lakes Alive program had kindly offered a bed for us show blokes.

As himself pushed off for a fifty mile ride aboard his bike Lisa the lady of the manor swept the village knocking on doors inviting the locals to our show in the hall.

An audience of twenty odd people enjoyed our performance and they were a good mix of local folk and people we had met that afternoon along the way. Despite being our smallest audience to date Lord Gregg and i both agreed it was one of our favourite shows so far and our hat counted £20

As we packed down the elusive Ray finally arrived and we spilled half of our take onto the bar as the village halls share.

We trundled Dolly around to the Harrison’s house and settled in to shower and drink a combination of wines. We passed a very pleasant evening together sharing stories and various beverages. We enjoyed a fantastic meal care of our hosts and stayed up well passed our bedtime considering we were to push Dolly into Kendal the following morning for a 9.30 show.

I enjoyed my time as their guest and i would very much like to return the favour next time they visit Barrow to introduce my wife and family. I’m sure the local community will miss them and their two charming daughters when the move to the bright lights of Kendal in the next few weeks.

The following morning it was our turn to move into Kendal and we left at 7.30. Well rested from a fresh soft bed the three mile stomp into town was both swift and welcome and we arrived at the college of performing arts to deliver a session to the students.

On arrival Hilary the lecturer asked us to deliver a half hour session and two hours later we were departing having performed a couple of items from our show as an example of our work and running well over time.

We answering many questions as to the nature of street theatre and the importance of outdoor art. I found it very interesting to dissect my career and continuing interests in the business after these past 25 years as a professional.

Later we shunted our Dolly through town towards our accommodation meeting and performing to many folk as we passed. Despite being a spritely 42 years old i am welcome in the youth hostel. My Vagabond attire is washed and drying and i’m well shaved and prepared for more television to advertise our show and the Lakes Alive season for the BBC in the morning.

We are only at the beginning of week two and i am already concerned the adventure is drawing to close to it’s climax for my liking. 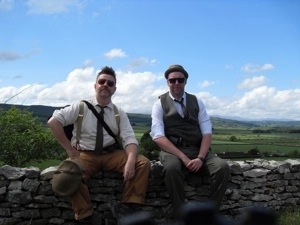